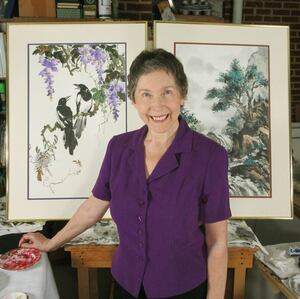 Born in Washington, DC of British diplomatic parents, Virginia Lloyd-Davies and her husband Dennis DiVito moved from Scotland to Rockbridge County, VA in 1986. A Sumi-e and Chinese brush artist since 1976, she has paintings in collections in the U.S, China, Britain, Europe, Japan, and Mexico.  Her teacher was Master Painter I-Hsiung Ju, with whom she traveled regularly to China & Taiwan.  She has been a U.S. citizen since 2002.

She is the author of “Mindful Artist: Sumi-e Painting” (2019) published by Walter Foster, an imprint of Quarto Publishing Group.

DVDs and Downloadable videos:  How to Paint Grapes (2017), How to Create Mist (2015), Autumn Waterfall (2015), How to Paint Peonies (2012) and Joyful Brush® Performance with Josh Harvey  (1998)
Her YouTube painting channel has been viewed over four million times.

She is also an accomplished singer, actor and puppeteer and has performed as a soloist with the Philadelphia Orchestra, the Buffalo Symphony and the Long Island Symphony.  She has appeared on radio and TV in the US, China and Britain and has written articles for The NY Post, Ad Astra Magazine, The Traveller and East-West Journal in the US, and The Scotsman, The Guardian, Aberdeen Press & Journal and She Magazine in Britain.
​Her art name "Wei Jen" is the Chinese approximation in sound of “Virginia” and translates as “Nothing But Love”