I-Hsiung Ju (朱一雄), Chinese Brush Painting Master, was my mentor from 1986 until his death in 2012. He shared his skills and his wisdom tirelessly with students in China, the Philippines, Taiwan and the United States. 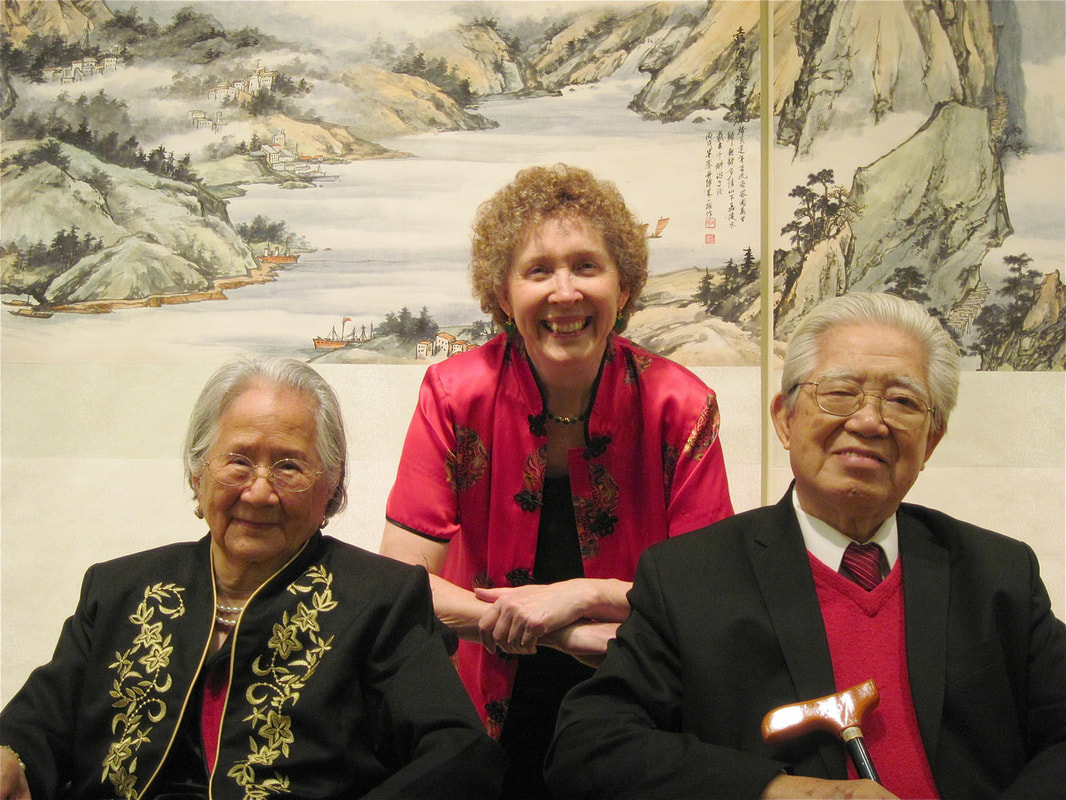 I-Hsiung Ju and Chow Soon Chuang Ju with Virginia Lloyd-Davies at Washington & Lee Exhibition, 2011
I-Hsiung Ju, Emeritus Professor of Art of Washington and Lee University in Lexington, VA, passed away on March 17, 2012. He is considered by many to be one of the few Chinese artists able to blend two worlds of style, technique, and idiom to produce a unique form of painting that is both modern and traditionally Asian. According to Prof Ju, "a Chinese artist is not only a painter, but also a poet and a philosopher." An author of several painting textbooks and numerous papers on Chinese art, he loved teaching the art of painting. His ink paintings are lessons in living and appreciation of nature. Following the Chinese painting tradition, he signed his paintings with his art name Tan Feng (丹鋒).  His given name I-Hsiung Ju (朱一雄) is transliterated in Pinyin as Zhu Yixiong.

Prof Ju's teaching legacy
I-Hsiung Ju’s books on the basic subjects of “The Four Gentlemen” (“Book of Bamboo”, “Book of Orchid”, “Book of Chrysanthemum” and “Book of Plum”) are favorites with Chinese brush painting and sumi-e students throughout the world and are currently available as ebooks. His tutorial videos on subjects such as flowers, birds, animals, landscapes, rocks and waterfalls can be purchased as DVDs. Selections from workshop sessions can be viewed on Virginia Lloyd-Davies's YouTube channel.

Prof Ju at Washington & Lee University
Professor Ju was born in Jiangyin, Jiangsu, China in 1923. He graduated from the National University of Amoy in 1947 and received his B.A. degree in Chinese art and literature. Because of the war in China, he moved to the Philippines to teach and to continue his studies, receiving a B.F.A. in painting in 1951 and an M.A. in history in 1968 from the University of Santo Tomas in Manila. While in the Philippines, he was a prizewinner in graphic art, oil painting, and Nanga works and held many one-man shows in Australia, Canada, China, England, Hong Kong, Japan, and the Philippines. In 1969, he was hired to be the Artist-in-Residence at Washington and Lee University in Lexington, VA in the United States and in 1970, he received tenure as Professor of Art. He was awarded the Best Art Educator of the Year in 1974 by the Chinese National Writers’ and Artists' Association in Taipei, Taiwan, and Distinguished Artist of the Year in 1978 by the National Museum of History of the Republic of China. In 1996, Ju was presented the Outstanding Achievement in the Field of Art Award by the Philippine Chinese Association of America. In 1974 he created the “Art in Taiwan” program at Washington & Lee University. Every two years, he led groups of students to spend six weeks experiencing the beauty of the island, local food, culture, and learning Chinese art from famous artists. In 1975 Ju also established the Art Farm Gallery in Lexington, VA where he conducted Chinese brush painting workshops and presented art exhibitions featuring young rising artists. After his retirement from Washington and Lee University in 1989, he continued to teach Chinese brush painting through correspondence courses and workshops, to give lectures and painting demonstrations, and to exhibit his paintings. 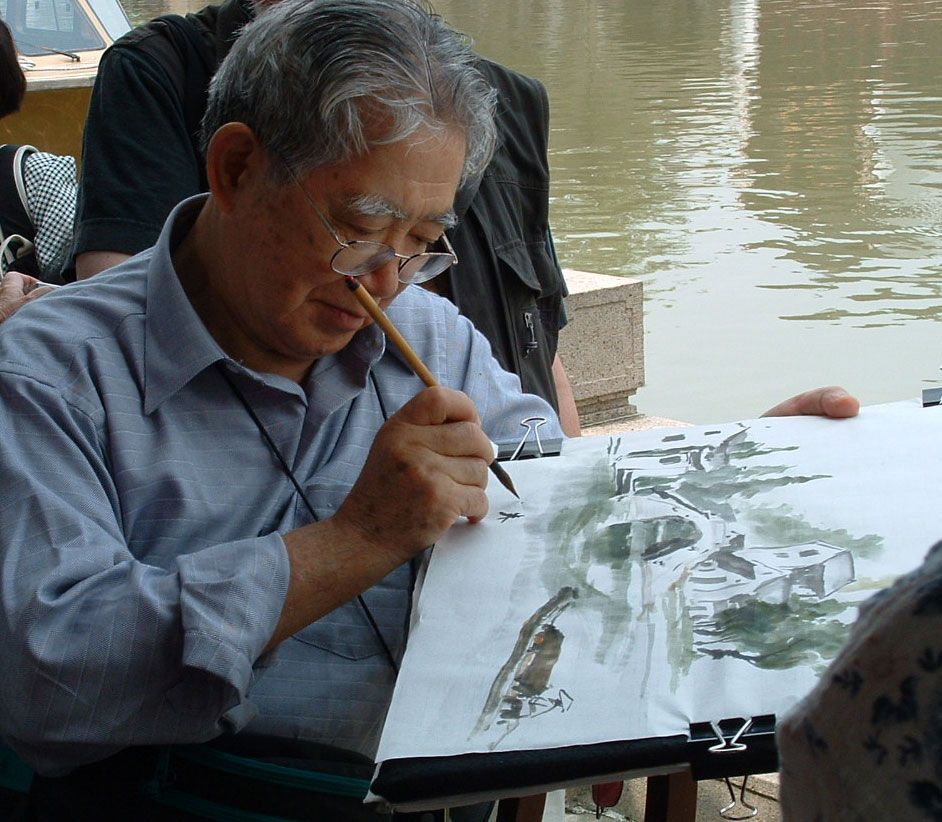 I-Hsiung Ju sketching on location in China in 2004
Prof Ju in Princeton, NJ
In 2002, he relocated his painting studio and home to Princeton, NJ where he continued to exhibit his works at his art gallery. He gave lectures and demonstrations to various groups in Princeton including the docents at Princeton University Art Museum, the Old Guard at Princeton University and the Women’s College Club of Princeton. In 2004 he held a one-man art show in Wuxi, China; in 2006 he took his students from the U.S. to Jiangyin, China, for painting workshops with local artists, and had a one-man show at the Jordan Schnitzer Museum of Art in Portland, Oregon. 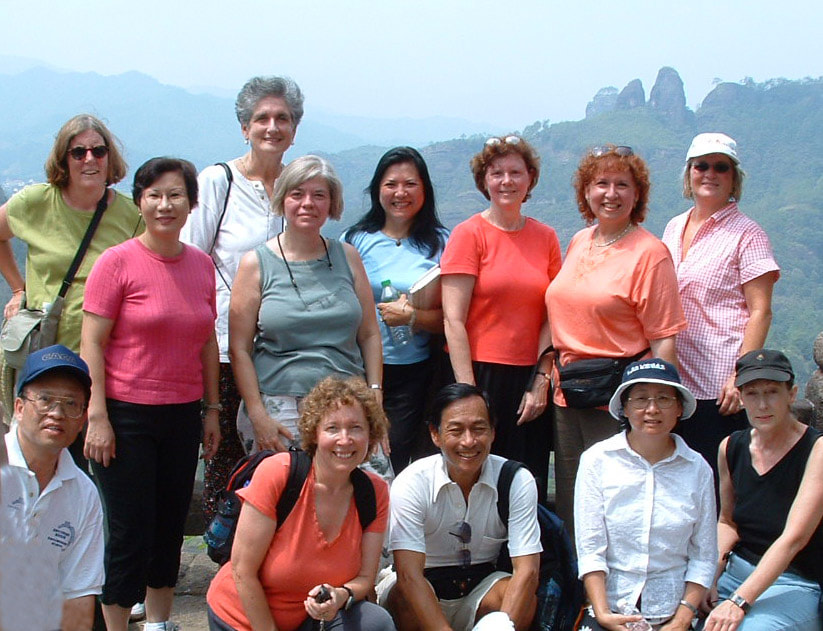 China Group 2004
Prof Ju's Last Exhibitions
In 2007 Ju arranged for his students to attend Master Classes at the National Taiwan University of Arts in Taipei, Taiwan. On his 85th birthday, Ju’s “85 Retrospective Exhibit” opened at the International Art Gallery of the National Taiwan University of Arts, showing 65 years of artworks. This show included his stunning 16 brush painting panel series depicting the Yangtze River, from its source in Qinghai Province to its mouth in Shanghai, going eastward to the East China Sea. This series is now in the collection of The Virginia Museum of Fine Arts. In 2009 he published a book containing memories of his life in China, the Philippines and the United States. In September 2010, he exhibited his new 20-panel Huangshan landscape series at Jiangnan University in Wuxi, China. In January 2011, his brush paintings were on exhibit at the Lyndon Arts Center in Athens, GA. In October 2011, he exhibited his Yangtze series and his Huangshan series at the Staniar Gallery at Washington & Lee University.

In 2015 a retrospective of Ju's work was exhibited at the Millennium Gate Museum in Atlanta GA, and his students Virginia Lloyd-Davies, Michael Kopald, Charlene Fuhrman-Schulz, Grace Ju, Carol Yee and Jamaliah Morais demonstrated during the opening event. I-Hsiung Ju's name is engraved into the stone of the Millennium Gate Museum in honor of his skills as a world-renowned painter, educator and pioneer in establishing artistic cooperation and understanding between the United States, China, Taiwan and the Philippines.

Sanford Schatz, I-Hsiung Ju, Charlene Fuhrman-Schulz during August 2011 workshop
A travel scholarship endowment has been set up in his memory through Washington & Lee University. His works are in many private and public collections such as the Virginia Museum of Fine Arts in Richmond, VA, the Jordan Schnitzer Museum of Art in Eugene, OR, the Westervelt Collection in Tuscaloosa, AL, the Washington & Lee University Collection in Lexington,VA and the  Millennium Gate Museum in Atlanta, GA. 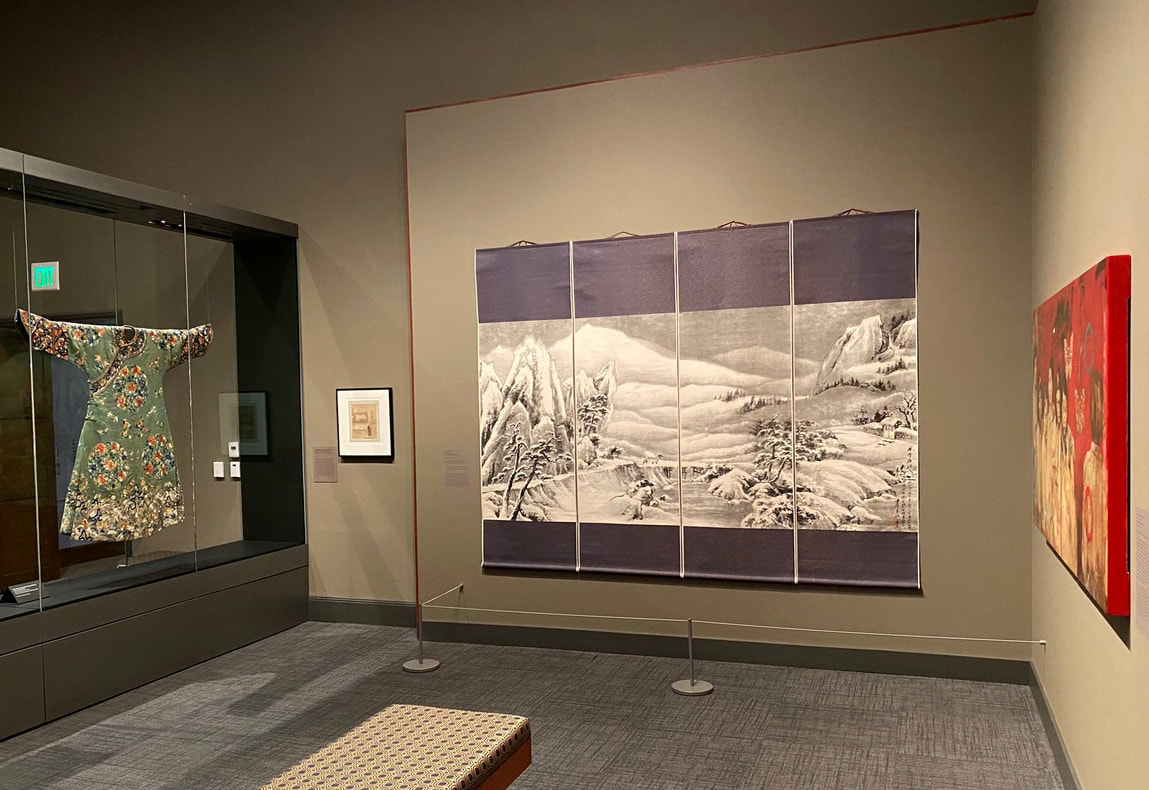 "Homecoming in the Snow" by I-Hsiung Ju (photo credit: David Hilton)
Four-scroll painting by I-Hsiung Ju (art name "Tan Feng") in the permanent collection of the Jordan Schnitzer Museum of Art in Portland, OR.

Find more information about Prof Ju's books and teaching videos on his website or through Amazon. Watch workshop videos at www.youtube.com/virginiald.